Sorry it's been so long since I've posted last. I can't even say I haven't been working on projects. My husband is deployed to Iraq so I started a couple really big projects in December hoping to keep my mind off the fact that he was on the other side of the world. I don't know if it worked because lets face it, the holidays still sucked, but at least I wasn't bored.

I revamped a boring lamp shade for my daughters room. I spent 1.00 on it at Ikea and then just cut strips of an old sheet I had. I sewed one line down the middle of the strip and then held on to one end of the thread and pushed the fabric up for the bunched up look.
Before 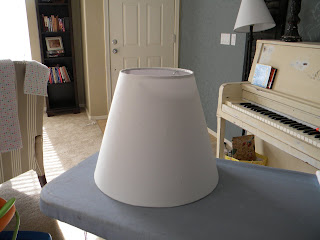 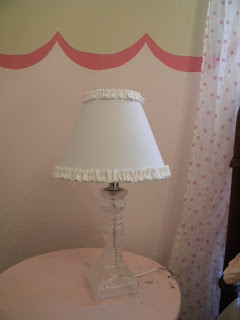 I also put up crown molding and repainted with pink scallops as a border. I found two old pink windows from my Mom's antique shop to hang on the wall. You guys should seriously check it out if you're ever in the Verde Valley. She's so cheap and has lots of hidden treasures (the store, not my mom) I found some fabric from Hobby Lobby and put it behind them. 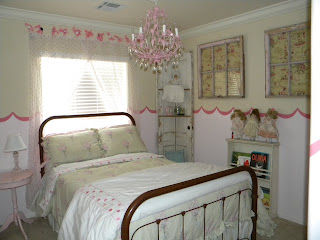 I just need help with one thing. I found a vintage "Cinderella" giant golden book at Merchant Square and I made copies of them. I want to Modge Podge them onto mdf boards or foam board or something but it needs to be thicker for that 3D look. I thought about canvas but that's really expensive and I'm not sure if they come in exactly 9 1/2" by 13" I want them to last long but if I use boards they'll be super heavy. Then there's the pain of mounting them. Should I use claw hooks, or use finishing nails to attach them directly to the wall? Here's a picture of them just taped up where I want them to go. What's the cheapest, lightest, most durable way to do this? 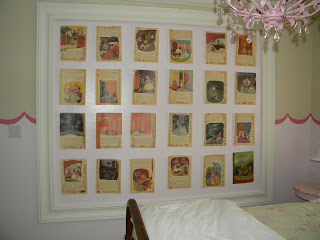 I also almost finished my sons room, I'm just waiting for a few pictures I ordered online to show up and I'll post that.
Posted by The Grandy's at 11:04 AM 6 comments