Welp. Go figure that the first pregnancy I announced at such an early stage would be the one that I miscarried. I just figured that I was so proficient at having kids that the chances I would have problems with my 5th kid were really small.

If you're a dude, you should probably just stop reading. Or if you don't care to know the gruesome details, just go make yourself a bowl of ice cream and sit down to a nice rerun of the office. Because you'll never look at an ice cream scooper the same after this...

Just kidding. But not really.

I started to spot bleed around 8 weeks. We went in for an ultrasound the next day and the baby was measuring pretty much on track. I had a small amount of clotting in the uterus around the placenta but it looked small enough that my body might have been able to re-absorb it. He gave me a 50% chance of miscarriage.

The next week looked good, I hadn't bled any more and we went in for another ultrasound about a week after the first one. The baby had decreased in size to about 5 weeks and 6 days and there was no heart beat. There was also quite a bit more blood in my uterus. My doctor was certain that I miscarried but wanted to get my blood count just to be sure. It came back a few days later at about 28,000 which is common for someone around 10 weeks.

So he gave me the option of doing a D&C. I immediately told him no, that I would do it on my own. And then a week later I still hadn't miscarried. After some great advice from family and friends everyone had told me the same thing. GET A D&C. If you don't have to experience the pain, DON'T.

Today was the D&C. And they were completely correct. I didn't feel the pain. I didn't contract and bleed like a stuck hog. It was immediately over and I could mourn and get it over with. I'm not even bleeding now. My doctor said it will be easier and faster to try and get pregnant again. All around it was a really great experience.

Were you a boy or a girl. Because I've got TONS of ideas on what your nursery is going to be like in heaven.
Posted by The Grandy's at 10:06 PM 12 comments

Mirror mirror on the wall

I have this long hallway wall in my house. I knew what I wanted to do with it before I even moved in. I have seen images of beautiful mirrored walls and fell in love. Lucky for me, I was also subconsciously hoarding mirrors so I had a good start. I put all of them up on the wall and they looked great except one spot. 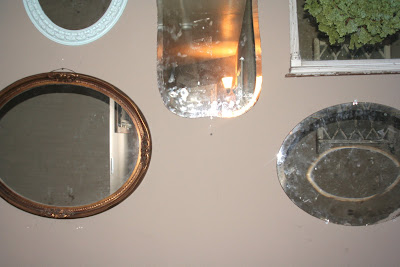 I needed a smaller mirror and I wanted something completely different from the other ones I already had up. I spied this beauty on www.furnituredomain.com. 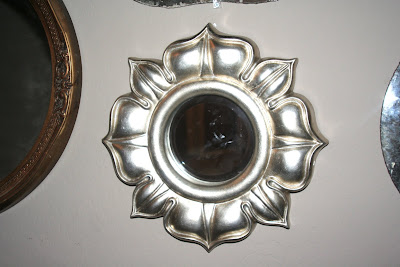 It's from a company called Bailey Street Trading.They have some really cute furniture too. It got to my house in like 2 days. Which is great because I would walk by that spot a couple times a day and stare at it because it offended me. Not any more! I have to say, it's the perfect mirror to pull together them all. I think it goes great with my antique mirrors, the more traditional new ones, or I could really see it in a modern room right above a cute night stand. Here's the link to the mirror. And here is a picture of the whole wall. 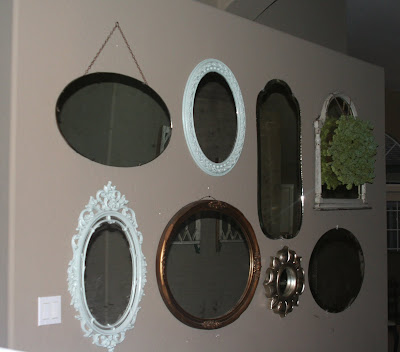 Sorry for the somewhat blurry, dark pictures. I wanted to get this up before I left for the weekend to my family reunion. Yes, 200 Finches together... in the mountains... with guns. Someone's bound to lose an eye.
Posted by The Grandy's at 8:08 PM 0 comments

I can't decide on a dang paint color but I found a night stand! It was sitting in my sisters garage forever when I swiped it and then it sat in my garage for a couple months. Since the black industrial table on the other side is a little taller, I needed this to be taller as well. It fits perfectly. Now about half of the room is furnished. 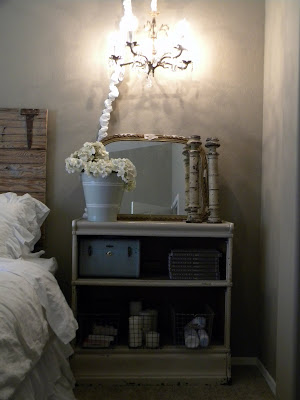 Two antique chandeliers hang on either side of the bed now. It makes the room look so much more romantic. Which is probably why I'm pregnant again. Just kiddin.
Posted by The Grandy's at 1:15 PM 4 comments 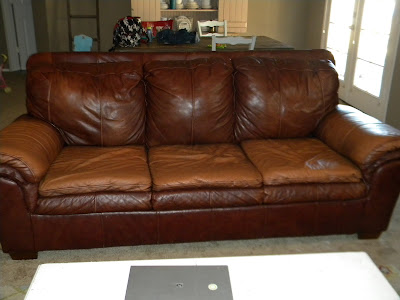 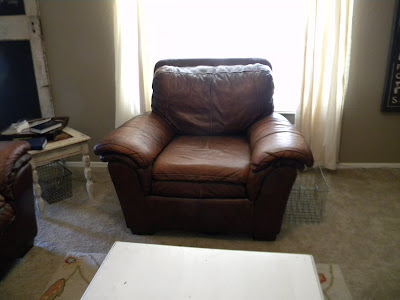 I'm getting rid of my leather couch and chair. $300 or best offer. I bought a sectional so I need to make room! Pick up only. Located in San Tan Valley
Posted by The Grandy's at 9:35 AM 1 comments 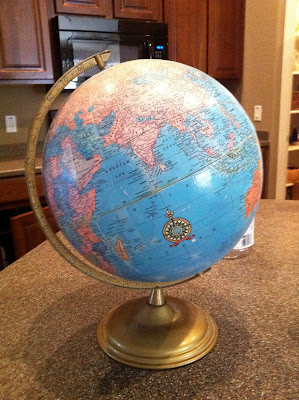 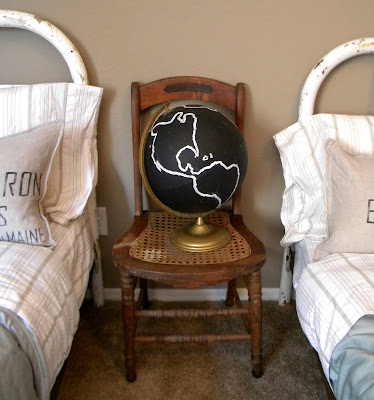 Want a tutorial? Here goes nothing. Paint with black paint. Draw on a pathetic attempt at continents with chalk. Erase. Retry. Erase. Retry. Figure that my 3 year old won't be able to tell the difference between Africa and the blob I drew. Trace over with white paint. Wipe off chalk. The end.
Posted by The Grandy's at 2:00 PM 1 comments

I was browsing the Restoration Hardware website and found some pillows that I love and wanted for my boys room. You can guess what happened next. I made my own version because I can't fork over $45 dollars a piece for these babies... 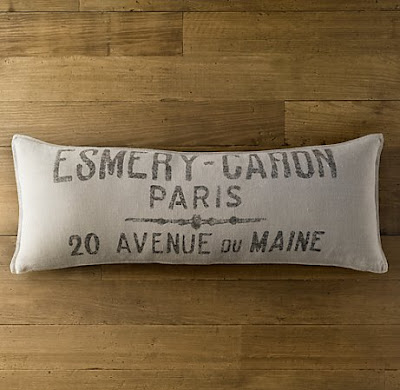 If you can't either, you're in luck. Because now that I made them myself they're on clearance at the website for $21.99. Figures. I still saved about $60.00 by making them though because I made 4. Here's my version... 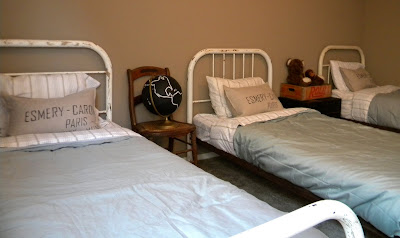 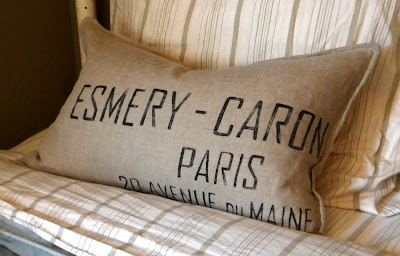 I used 3 in my boys room and one in my master. 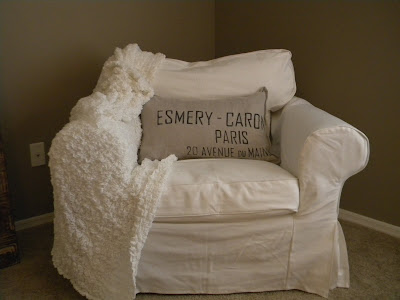 And here's how I did it.

1. Type up a font that you like and print it out. I used Agency FB in word.

2. Trace it onto a blank stencil with a pen. 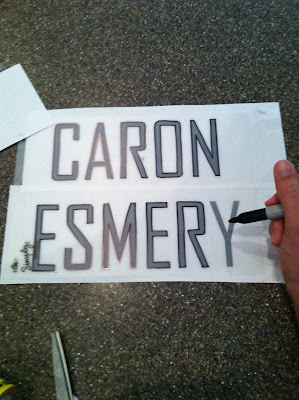 4. Trace it out onto the fabric with a pen. 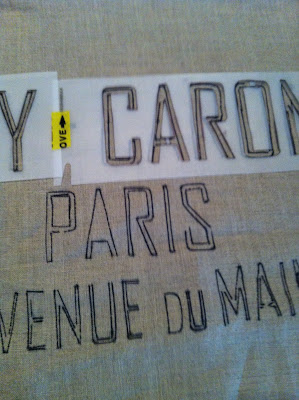 5. Mix craft paint and fabric medium according to directions.

6. Paint in the lines. Let it dry and wash. Then it'll be ready to sew! 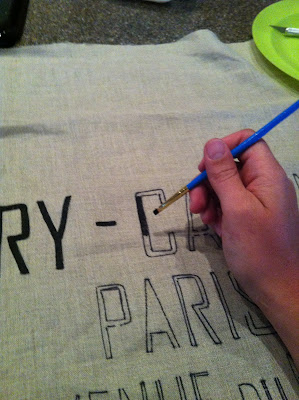 Man I love fabric medium. I use it all the time. I should buy it by the gallon.

I know it's been forever since I've been on here. My laptop had been warning me for a while that it was about to die. Which I thought was pretty considerate. And then it went through with it. It will be missed. So I'm on the hubbies puter and it doesn't have any photo editing software. Go figure.

But I have a couple of images for you of my kids bathroom wall I just finished. I wanted a beachy vibe and loved the look of this wallpaper... 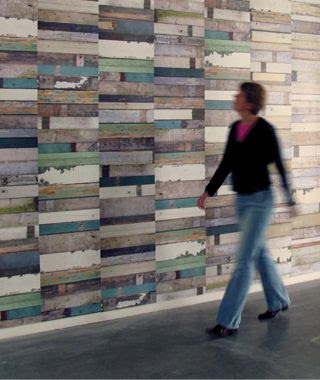 Here's a link to their website. Who is "they" you ask? I have no idea. Because I don't speak dutch. But I'm assuming since it's available in a completely different country it would take a decade to get here and is probably WAY more than I would ever spend. So that's where my mothers favorite quote comes in.

"Necessity is the mother of invention."

What I came up with has kind of the same look as the wall paper with an infinitely cheaper price tag. Like so cheap it was FREE. In fact, people were thanking me for getting the supplies I needed off their hands. 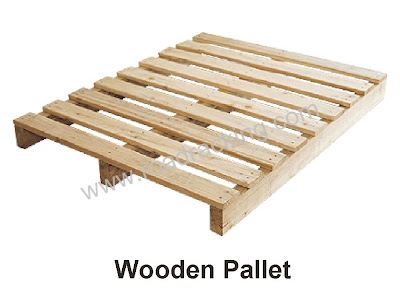 Has anyone else noticed a massive amount of orphaned wood pallets in the world? Well, in my neck of the woods there is a ton of them. And no one wants them. Apparently cracked, old, hard as heck wood isn't considered useful. But I love the character of old wood. It would have been way easier to buy 1x4's and paint them but I wanted it to really look like it's been around the block. Here's what a little TLC can do with wooden pallets... 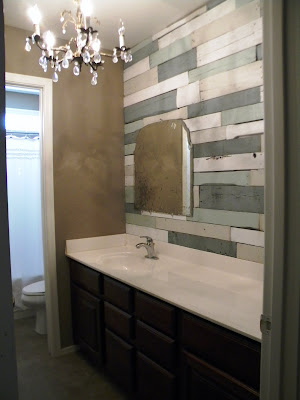 I had to use a saw with a metal blade to get them off the pallet because they were just cracking at the nail holes. Once I figured that out, I just cut them to various lengths painted them 4 different colors I already had and starting nailing them up. 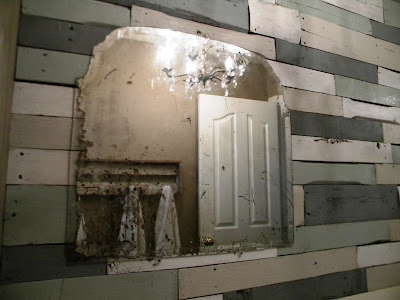 Here's the towel rack on the opposite wall. To hold all the towels. And stuff. 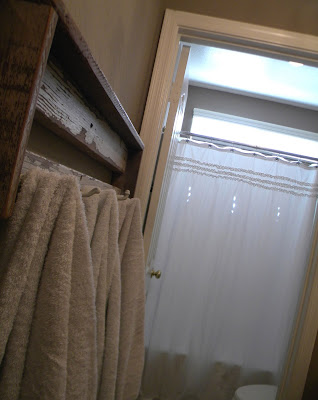 I used a finish nail gun so it would be really easy to take them down again if I wanted to change things up. 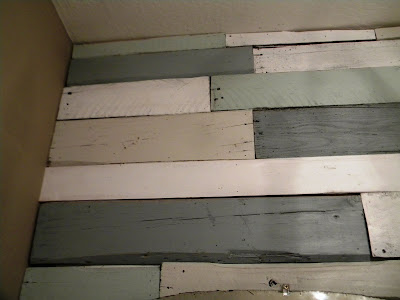 Overall I spent a total of $3.16 on this project. And that was just because I got hungry and went to taco bell. So really I guess it didn't cost anything.

I still want to paint the dark tan a lighter color but I'm kind of avoiding painting for some reason. Maybe because the thought of repainting 3,000 sq feet sounds exhausting to me.
Posted by The Grandy's at 1:49 PM 22 comments